Despite the El Niño-induced drought, farmers in Indonesia have harvested impressive yields of rice as a result of Climate Field Schools organized by the Indonesian Agency for Meteorology, Climatology and Geophysics (BMKG) with support from WMO.

The Climate Field Schools, now in their fifth year, embody the goal of the Global Framework for Climate Services (GFCS) to improve the provision and use of tailored climate services to improve food security. So far, 25 provinces have benefitted from the three-month field schools where BMKG staff and extension workers meet with farmers every 10 days to discuss how to apply weather and climate information during the planting and growing season as well as how to use simple tools, such as rain gauges, and temperature and humidity readings.

In order to ensure the long-term sustainability of the project and to spread its benefits as widely as possible, BMKG organized a “Training of Trainers Course” from 25 to 29 August aimed at staff from meteorological and agricultural departments throughout the Asia Pacific region. There were lectures and hands-on exercises on cloud and rain formation processes, meteorological instruments, and the introduction of science-based information to indigenous knowledge-based cropping techniques. 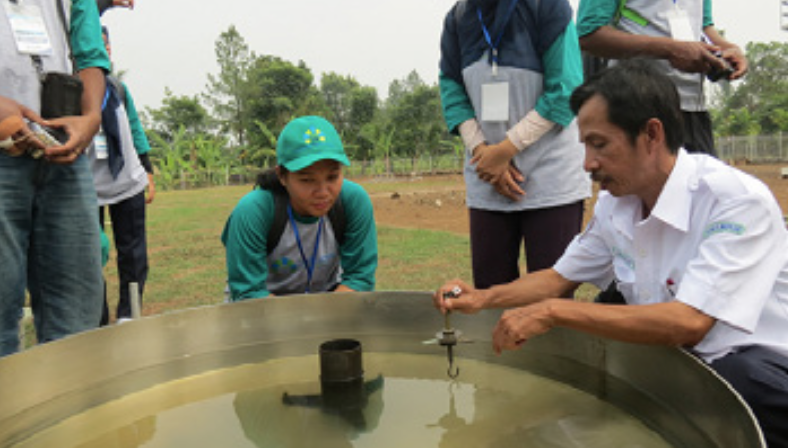 Participants from Indonesia, Myanmar, the Philippines, Thailand, Vanuatu and Viet Nam attended the course at the Regional Training Centre in Bogor Citeko and visited a Climate Field School in the Banten province. “We need to exploit climate information for the benefit of society, especially in developing countries which most need it. Farmers need to know how to cope with climate variability and climate change which could significantly hamper their production, reduce their crops and cut their earnings,” said Dr Andi Eka Sakya, Director-General of BMKG. He added that “agriculture is one of the most highly sensitive sectors to the drought we are experiencing in this El Niño year.”

“One of the main challenges is communicating climate science to the end user,” said Robert Stefanski, Chief of the WMO Agricultural Meteorology Division. “We have to translate our language about what is happening in the atmosphere into basic information like ‘will there be rain in 2 days?’ or ‘can we do field work in 3 days?’”

Results have been encouraging, with increases in maize and rice yields of up to 30% in the selected pilot project fields in the past four years. For example, in Sindang Jaya, in Banten province, farmers for the first time this year planted rice during the secondary June-September cultivation season on plots of land normally used for less productive vegetables. “Before, we couldn’t even get anything from the field during the dry season. In the past we tried to plant paddy rice but we failed. Thanks to BMKG Climate Field School, this year we had a good harvest,“ said Yamah, one of the farmers in Sindang Jaya after the harvest day on 7 September.