The Royal Meteorological Society – Engaging the Next Generation 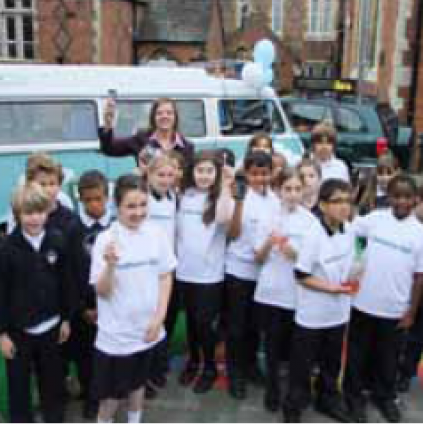 The Royal Meteorological Society – Engaging the Next Generation

Since its foundation over 150 years ago, the Royal Meteorological Society1 has grown and diversified, but its focus on advancing the science of meteorology has remained. The Society is the custodian of both the science and the profession of meteorology in the UK. With over 3 000 members around the globe, it is also one of the world’s largest meteorological societies.

The Society, thanks to its heritage and reputation, is able to get the ear of policymakers on weather and climate matters at home and internationally. Its dynamic website and social networking channels deliver news and information to people every day of the year, while its portfolio of journals and online newsletters caters to a broad audience – from the specialist scientist through to the general public, including youth.

The public outreach arm of the Society – theWeather Club – was launched in 2010 to inform and educate while encouraging people to participate and pursue their interest in meteorology. On its website and quarterly newsletter, theWeather Club publishes news items, features on weather and climate and stunning photography. It works closely with media partners to provide clear advice and comments on current weather situations and scientific reports. In addition, the website provides opportunities for members to participate in weather debates and discussions, join forums, post views, propose ideas, submit images and share weather observations. Access to “Ask the expert” provides a two-way educational process.

TheWeather Club promotes training courses, educational activities and relevant events linked to weather and climate. It reaches out to young people with information on careers in meteorology and on national weather experiments that encourage school and public participation in the collection of weather observations, such as the Great British Weather Experiment.

The Society established a Climate Science Communications Group in 2011 to disseminate more effective scientific communication on climate change. It draws together climate science expertise and experienced media professionals. The Group has given to the Society’s climate communications a direction and focus as one single coherent programme, identified potential collaborators and partners, and defined when new initiatives should be launched to meet specific needs.

The Society’s education website is a platform for curriculum-linked resources, instrument loans, useful information and access to trained Meteorology Ambassadors for school visits. The Meteorology Ambassadors, mostly early career meteorologists, give up their time to go into schools to give talks and run activities.

In partnership with the Royal Geographical Society and British Council, the Society developed the Climate- 4Classrooms website. This free resource is for schools in the UK and around the world. It contains up-to-date scientific data about the Earth’s climate system and projections that explore the potential impact of climate change at the national scale. Climate4Classrooms is the first website to use national level climate projections tailored to individual countries. It allows teachers and students to see how their nations and others around the world might be affected by climate change and how they might adapt to or mitigate these changes.

The Society provides weather-training days to trainee geography teachers. Most of them are geography graduates, but not having studied UK weather since they were 14 years old, they feel unprepared to teach it in the classroom. During 2013, students from 20 different universities learned about mid-latitude depressions and other aspects of meteorology through lectures, fieldwork and practical activities. This increases both their subject knowledge and confidence, leading to improved teaching of weather and climate in secondary schools.

Every year the Society lends weather instruments to schools, free of charge, for classroom activities and to allow them to conduct fieldwork. The Society’s higherspecification instruments accompany young people on expeditions to remote locations worldwide. The Society also supports the OPAL (Open Air Laboratories) weather roadshow, which tours the UK allowing young people and the general public to learn about observations, weather forecasting and extreme weather.

The Society regularly writes articles for science and geography magazines aimed at young people and their teachers – recent topics have included launching weather balloons from schools, weather fieldwork and teaching tornadoes. There has been a flurry of publicity relating to weather balloon launches from schools, as they are rightly seen as being an exciting application of Science, Technology, Engineering and Mathematics (STEM) as well as geography skills. The Society, with support from scientists from Manchester University, had its own balloon launch from a school in the northwest of England. It has also written guidelines for other schools planning launches. A balloon, carrying a camera, tracker radiosonde and small parachute, can reach an altitude of around 21 km before its parachute opens, returning it safely to the ground, where it can be recovered using the tracking system. The radiosonde collects atmospheric data.

Many members of the Society, including the student community, have Twitter accounts and tweet regularly. The real time Twitter platform is a powerful medium for communicating weather events, its immediate broadcast of tweets makes it ideal for conversations and catching up on news. It is invaluable for students who tweet about their work, ideas and courses. It is easy to gain a sense of comradeship through Twitter, and it is an ideal tool for networking.

On 20 March, the Society will host a Twitter chat on careers arranged in conjunction with World Meteorological Day. The Society will collaborate with the Institute of Physics and a number of weather service providers to offer careers advice and answer questions online.

As the science of meteorology involves pooling knowledge from a wide range of fields, the Society works with specialists from a growing range of disciplines. By bringing experts together, it encourages collaboration and the dissemination of knowledge on weather and climate. Working together with the Met Office and the Department for Education, it developed the Weather Observations Website (WOW). A hub for UK weather observations, the site helps to educate people about weather and to stimulate amateur interest in weather observing. The site hit 100 million observations in the spring of 2013.

Scientific publishing is the core activity of the Society, which has a portfolio of six journals as well as a book-publishing programme with a growing number of titles. The Society also maintains a programme of local, national and international meetings for members and non-members. In addition, it delivers a wide range of charitable benefits with schools, the public and the meteorological profession. The time volunteered by its membership increases the Society’s impact in advancing the understanding of weather and climate, and the science and its applications, for the benefit of all.