A New Edition of the International Cloud Atlas

"Before the Storm," Davor, Croatia by Ivica Brlic.jpg 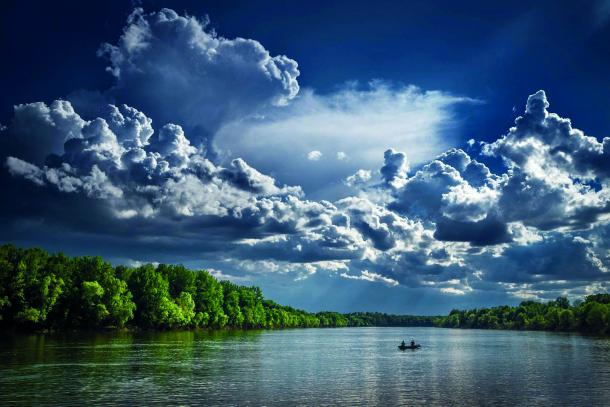 A New Edition of the International Cloud Atlas

A new edition of the International Cloud Atlas is scheduled to be released simultaneously with this Bulletin following three years of hard work. The International Cloud Atlas is the world’s reference for the identification and classification of clouds and other meteorological meteors. Its use by WMO Members ensures consistency in reporting by observers around the world.

First published over a century ago in 1896, the Atlas has not experienced many updates. There have been numerous fundamental changes in our world since the most recent in 1975/1987 (Volume I/Volume II), including the emergence of the Internet and the invention of cellular phones with cameras. Important advancements in scientific understanding, too, have come about. The time is ripe for a new version.

Today’s high-quality cameras and modern technology can deliver an abundance of excellent photographic examples of clouds and all other meteorological phenomena, providing better images for the Atlas than ever before. This allows us to present more phenomena, and to illustrate variation in their appearance with different locations and viewing conditions.

In an age where the Internet has become a primary resource, the new edition will also give the Cloud Atlas a strong online presence. Without this, many alternative atlases have appeared online. This threatens the global standardization of cloud classification, which is one of the primary reasons for the existence of the International Cloud Atlas.

Yet the new 2017 edition goes beyond simply providing a web-based version: it modernizes information and style and takes advantage of the opportunities of a digital format. This new Cloud Atlas is intended to once again be the de facto reference standard for classifying and reporting clouds and other atmospheric phenomena referred to as “meteors” in the Cloud Atlas. Its up-to-date reference material will be easily accessible to a wide range of users, from professional observers and trainers to teachers, enthusiasts and the general public.

The new version retains the overall three-part structure of the 1975 text edition, first covering the definition of a meteorological meteor and the general classification of meteors; then looking at clouds; and finally, discussing meteors other than clouds – that is, hydrometeors, photometeors, lithometeors and electrometeors. However, there are several important and interesting new changes to this edition.

Among the most exciting and widely discussed aspects of this edition are the new, additional classifications of several known phenomena.  The need for continuity over time, particularly to avoid affecting climate records, means that these additions were not undertaken lightly, and existing classifications have not been changed.

As might be expected, no additions have been made to the 10 genera or primary cloud types. However, a new cloud species has been added: volutus, which occurs within the genera Altocumulus and Stratocumulus. It describes a long, typically low, horizontal, detached tube-shaped cloud mass that often appears to roll slowly about a horizontal axis. When formed through the dynamics of a convective storm, it differs from the supplementary feature arcus in that it is fully detached from other clouds. The Australian morning glory cloud is a non-convective example of this species.

Five new supplementary features have also been added: asperitas, cavum, cauda, fluctus and murus. The most discussed of these is asperitas, which has been observed and described by many people in recent years. The Cloud Appreciation Society strongly argued for the cloud classification to be extended in order to better describe clouds with this appearance – that is, with well-defined, wave-like structures in the underside that are more chaotic and have less horizontal organization than the variety undulatus. Some of the new supplementary features have familiar common names – for example, most people know fluctus as “Kelvin-Helmholz wave”, cauda as “tail cloud” and murus as “wall cloud”.

A new accessory cloud, flumen, has been included as well. Commonly known as “beaver’s tail”, it is associated with a supercell severe convective storm.

There are also five new special clouds in this edition: cataractagenitus, flammagenitus, homogenitus, silvagenitus and homomutatus. The suffix “-genitus” indicates that the term describes localized factors that led to cloud formation or growth, while “-mutatus” is added when these factors caused the cloud to change from a different cloud form. These special clouds are influenced by large waterfalls, localized heat from wildfires, saturation of air above forests and humans.

Definitions, descriptions and illustrations of meteors other than clouds have also been expanded to include several more phenomena. For example, snow devil and steam devil have been added to the hydrometeors, together with details regarding types of tornadoes. The optical phenomena (photometeors) have been thoroughly expanded with illustrations of various types of halo phenomena, rainbows and mirages. Upper atmospheric electrometeors known as “sprites” and “jets”, not yet discovered when the previous edition was published, have also now been added.

The images used for this new edition often have better quality and information content than those in the previous version. For example, the new image for fog shows this phenomenon’s effect on horizontal visibility much better.

The web format also allows for much richer content and presentation. For instance, there is now an interactive image viewer that allows users to actively highlight features indicated in the captions. This approach is much simpler than that of the 1987 printed Atlas, which involved using a system of numbers around the border of the picture to pinpoint features. Users can also access any supplementary information that might be available, such as thermodynamic soundings, synoptic charts, satellite images and more. With the image viewer, readers can look at two images side by side in order to compare similar but distinct cloud types, or one particular cloud type in different climatic zones or seasons.

An extremely useful feature of the last Atlas were the Pictorial Guides for the Coding of Clouds, illustrated flow charts that led readers through a simple process to identify a cloud’s genus and species. The new edition is enhanced with a redesigned and more accurate Aid featuring colour illustrations, each hyperlinked to a photographic image. The Aid is divided into three charts, one each for low-level, mid-level and high-level clouds. In addition, a simplified Cloud Identification Guide is now provided to help users easily identify the 10 genera. This should be especially useful for training and teaching, and for amateur observers.

This version of the Cloud Atlas is the first to include a Glossary of Terms. The task team felt it was important for users to be able to find explanations for some less-common names and terms that are not formally defined within the main text, but that are used by observers in various parts of the world – for example, “bear’s cage”, “barber pole”, and “beaver’s tail”.

Enhancements in text and images

A wonderful change enabled by the web format is the ability to view the text directly alongside relevant images – these were separated in the previous edition, with the text included in Volume I and images in Volume II. This, together with the ability to view and compare images side by side, increases the Atlas’ value as a reference and teaching tool.

It is also possible to search for images based on Köppen climate classification, enabling users to view and compare things like a Cumulonimbus capillatus in the tropics and one at high latitudes, where the vertical extent is very different.

Great effort was also put into updating the language and style used, thus improving readability. Prior to this new edition, much of the text had remained unaltered for 75 years or more, while in that time common-use language and writing style had evolved. Writing aimed at an Internet audience tends toward short, easily skimmed sentences rather than the more complex and sometimes nuanced sentences common in the past, and the new changes reflect this.

The content of some descriptions and explanations has also been updated to include significant advances that have been made in the scientific understanding of clouds and other meteors. For example, more is now known about the conditions in which upper atmospheric clouds – that is, polar stratospheric clouds and noctilucent clouds – can form and exist. 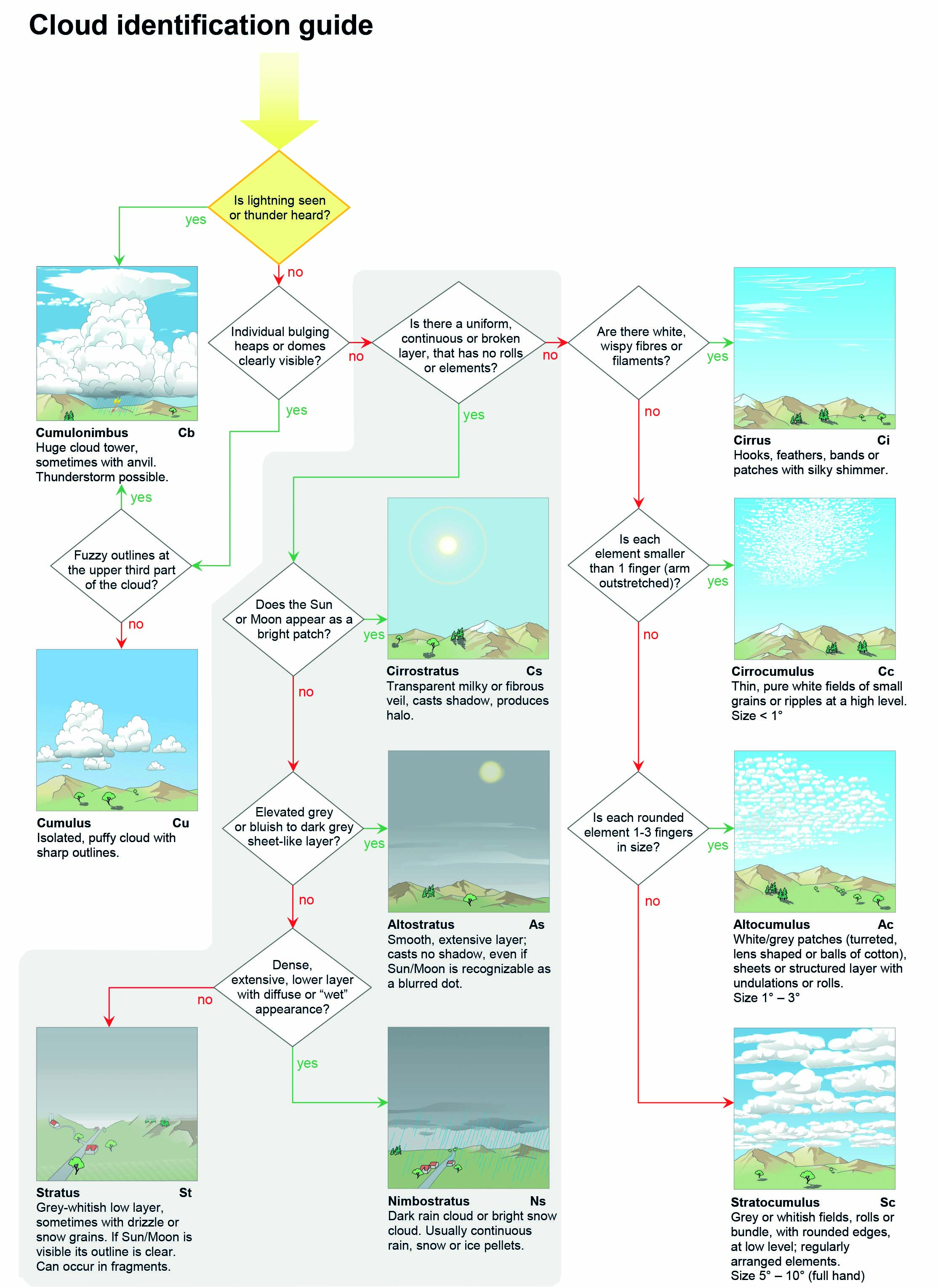 Improve use for training and education

The International Cloud Atlas remains first and foremost a reference for cloud classification. However, like the previous editions, it will also be used to train observers and, in some cases, teach meteorology students. Its new web-based format makes it easily accessible. Its search filters will permit users to find images not only of all cloud and meteor types, but also all situations. WMO and the Task Team hope and anticipate that the Atlas’ usefulness for training and teaching will continue to increase.

Into the digital era

The new, 2017 edition of the International Cloud Atlas brings this important document into the digital era. It provides professional and amateur observers of clouds and other meteors with an online resource that can be used as a reference, a training tool and a source of stunning images and descriptions. In addition, it updates and strengthens the language used to classify and report cloud and meteor observations, ensuring the consistency and clear communication that is essential to this field.

You can access the 2017 International Cloud Atlas at https://cloudatlas.wmo.int

Creation of the 2017 edition of the WMO International Cloud Atlas was a collaborative, three-year effort by the WMO Commission for Instruments and Methods of Observation (CIMO), its Task Team (below), the Secretariat, the Hong Kong Observatory, subject matter experts, institutions that freely contributed synoptic charts and other contextual information, and especially the enthusiastic observers and photographers who submitted their images.

WMO Task Team on Revision of the International Cloud Atlas:

The Task Team is also indebted to cloud expert Frank Le Blancq (Jersey) for his tireless contributions, and to experts around the world who provided opinions and arguments.