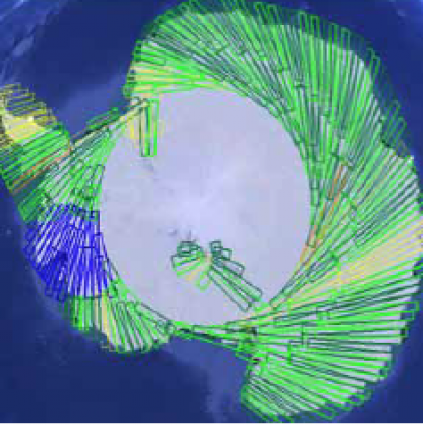 WMO and the United Nations Framework Convention on Climate Change (UNFCCC) both recognize ice sheets as an essential climate variable within the Global Climate Observing System. Observing and monitoring the vast, remote Arctic and Antarctic ice sheets, however, is a challenge, and only feasible globally from space. To better understand and help predict changes in ice sheet size and volume, and implications for example on sea level, significant progress is needed in generating continuous, global datasets. This can only be achieved through global cooperation, and by bringing together all space agencies that operate satellite instruments relevant for observing ice sheets and other variables of the cryosphere, the WMO Polar Space Task Group (herein referred to as the Task Group) started this task in 2011. The Task Group prioritizes user requirements for observations, engages in dialogue with polar science authorities and supports the development of satellite sensor-derived products for cryospheric research and applications. The Task Group builds on the legacy of successful satellite data collection efforts during the International Polar Year.

Over the last two years, the ice sheet science community collected and consolidated user needs for observing ice sheets in order to inform the Task Group of satellite operators. Surveys on ice sheet science and climate change impacts summarized the requirements of more than 60 experts worldwide.

Users emphasized the need for continuous records of low-resolution satellite data in the interior areas of ice sheets and high-resolution data in the margin areas for measuring both ice velocity and grounding lines (where the glacier loses contact with the ground and becomes a floating ice shelf), particularly for modelling major fast-flowing ice streams and glacier systems.

Polar-orbiting satellites with Synthetic Aperture Radar (SAR) instruments provide an all-weather, day/night sensing capability which is suitable for measuring ice sheet topography and variability. SAR instruments use active radar signals (in L, C, or X-bands) and typically offer a range of observation modes that determine the spatio-temporal coverage of the generated datasets. SAR-related Science Requirements for Ice Sheets were analyzed, consolidated and documented for consideration by the Task Group.1 The document suggests a phased implementation of SAR data acquisition campaigns for Arctic and Antarctic ice sheets monitoring and outlines areas of priority. To address these requirements, the Task Group is using the SAR assets of several space agencies (see inset Box on the right), a “virtual constellation” of coordinated satellite SAR missions. 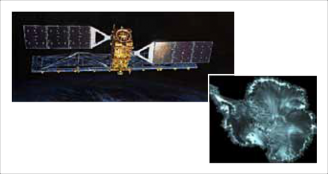 During its 17-year mission, the Canadian RADARSAT-1
provided a wealth of SAR data over polar regions, including
the Antarctic Mapping Mission in 1997 and concluding with
InSAR coverage of Greenland in 2013. - CSA, MDA, BPRC

A critical issue during Phase 1, carried out in 2013, was the availability of SAR sensor systems and imaging capacity, given the recent demise of the important ASAR (ESA, Europe) and PALSAR (JAXA, Japan) sensors and the planned launch of new sensors in the near future. However, available RADARSAT (CSA and MDA, Canada), TerraSAR-X (DLR, Germany) and COSMO-SkyMed (ASI, Italy) systems could be tasked with data acquisitions over the Arctic, with a focus on Greenland, Svalbard and Canadian ice caps. Interferometric C-band SAR coverage of Greenland was acquired by the Canadian RADARSAT-1 in fine imaging mode between January and March (just before that mission also came to an end) with data reception at Norway’s Tromsø Station. Concurrently, X-band data were acquired over fast flowing glaciers of the western and eastern coasts of Greenland.

Throughout most of 2013, RADARSAT-2 acquired, in right looking SAR mode, repeated interferometric coverage of the coastal regions of Antarctica from 80 degrees south to the coast, while the German and Italian X-band missions acquired detailed data sets over selected fastflowing outlet glaciers in Antarctica.

The acquisition, reception and processing of the data was made possible by the participation of the SAR mission operating agencies and the dedicated support of other space agencies (ESA, NASA and the Norwegian Space Centre) and related national partners (Alaska Satellite Facility, Kongsberg Satellite Services AS, and MacDonald Dettwiler and Associates).

Achievements so far in the first phase include coordinated ice sheet planning response and SAR data acquisitions, as follows:

• acquisition of RADARSAT-1 InSAR data sets over Greenland) and RADARSAT-2 coverage of Antarctica;

• acquisition of detailed TerraSAR-X InSAR data sets over select coastal areas of Greenland and Antarctica; and 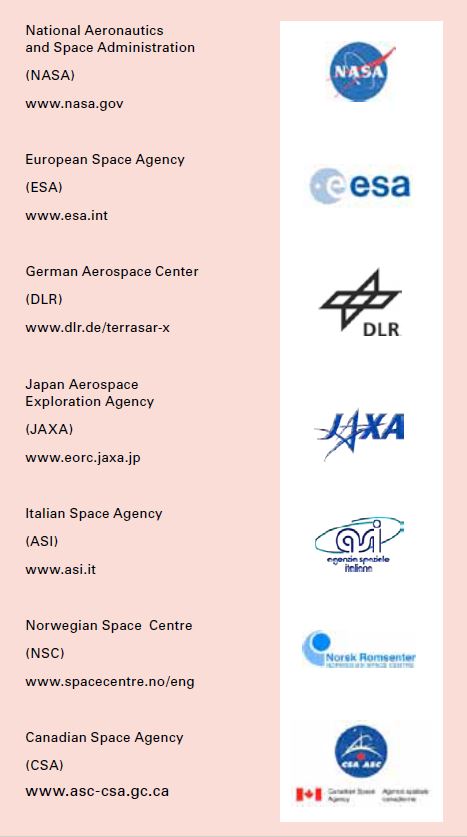 With the launches of the Japanese ALOS-2 and the European Sentinel-1A approaching in 2014, the Task Group will be able to coordinate acquisitions among a larger fleet of SAR satellites. Repeated coverage of ice sheets in the north and south polar regions is planned during Phase II for two to three consecutive years with an increasing number of missions.

RADARSAT-2, TerraSAR-X, COSMO-SkyMed, ALOS-2, and Sentinel-1 SAR data acquisitions are planned for 2014 to 2016. For both Greenland and Antarctica, the Japanese ALOS-2 coverage is defined in the Basic Observation Strategy and the European Sentinel-1A SAR coverage is included in the Copernicus strategy in relation to ice sheet and climate applications. Canada is planning left-looking RADARSAT-2 SAR data acquisitions for 2014 to cover the centre of Antarctica south of 78 degrees. The German and Italian X-band mission plans include timed series of fast flowing glaciers in both Greenland and Antarctica. A detailed coordinated inter-agency observation strategy for Phase II will be developed and adopted in 2014.

The Task Group provides the opportunity to coordinate acquisitions from the array of different SAR missions, to best achieve ice sheet observations in fulfillment of science objectives set by the global science community. The satellite assets of member agencies will continue to monitor ice sheets and contribute to the legacy of archived Earth observation satellite products of the Arctic and Antarctica. Through this exercise, the space agencies are demonstrating their continued commitment to the critical imaging requirements articulated in response to key science issues.

The ice sheet requirement document is the first in a set to be produced by the Task Group, which is currently working with the science community to document consolidated sets of observation requirements for permafrost, snow, and sea ice. Future communications will specifically address advancement on the ice sheet response but also provide an update on the future responses to other sets of requirements.

Bernd Scheuchl (University of California at Irvine, USA, e-mail: bscheuch@uci.edu) serves as the Task Group science point-of-contact and provided the documentation of SAR Science Requirements for Ice Sheets (May, 2013). On behalf of his SAR CWG colleagues, Yves Crevier (Canadian Space Agency, e-mail: yves.crevier@asc-csa. gc.ca) oversaw concept and production of a brochure by Dirk Werle and Don Ball which was used as the basis for this article. The contributions of MDA, K-SAT, ASF, e-GEOS are gratefully acknowledged.

Highlight from the ice sheet data acquisition started in 20133 4 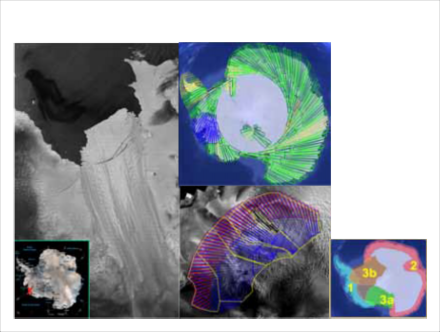 Priority areas for data acquisition (below right) are marked from high (1) to relatively low (3), as identified in the SAR Science
Requirements for Ice Sheets (see footnote 1 below.)