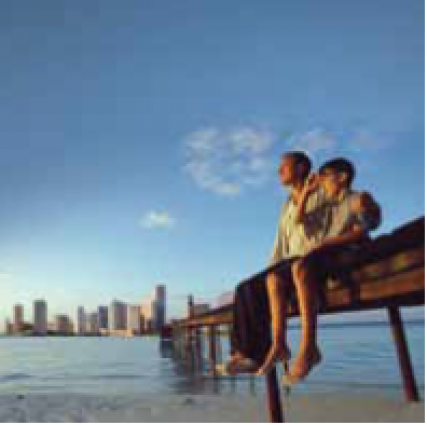 How is the biggest ecosystem on Earth faring?

The ocean covers nearly three quarters of the Earth’s surface, contains 96 per cent of its living space, provides around half of the oxygen we breathe and is an increasing source of protein for a rapidly growing world population. However, human activity is having an impact on this precious resource on local, regional and global scales.

Over the coming decades and centuries, ocean health will become increasingly stressed by at least three interacting factors. Rising seawater temperature, ocean acidification and ocean deoxygenation will cause substantial changes in marine physics, chemistry and biology. These changes will affect the ocean in ways that we are only beginning to understand.

It is imperative that international decision-makers understand the enormous role the ocean plays in sustaining life on Earth, and the consequences of a high CO2 world for the ocean and society.

Ocean acidification is directly caused by the increase ofcarbon dioxide (CO2) levels in the atmosphere. When CO2 enters the ocean it rapidly goes through a series of chemical reactions, which increase the acidity of the surface seawater (lowering its pH). The ocean has already removed about 30 per cent of anthropogenic CO2 over the last 250 years, decreasing pH at a rate not seen for around 60 million years.

This effect can be considered beneficial since it has slowed the accumulation of CO2 in the atmosphere and the rate of global warming; without this ocean sink, atmospheric CO2 levels would already be greater than 450 ppm. However, the continuation of such a fundamental and rapid change to ocean chemistry is likely to be bad news for life in the sea; it will not only cause problems for many organisms with calcium carbonate skeletons or shells (such as oysters, mussels, corals and some planktonic species) but could also impact many other organisms, ecosystems and processes with potentially serious implications for society.

The average acidity of the upper ocean has already declined by around 0.1 pH unit (30% increase in acidity) since the industrial revolution and it is expected to further decline by about 0.3 pH units by the end of this century if CO2 emissions continue at the current rate.

Over the last decades ocean warming has been a direct consequence of increasing atmospheric temperature due to the “greenhouse effect.” This warming affects the exchange of gases between the ocean surface and the atmosphere, and their transport and storage in deeper waters. In a warmer ocean, there will also be less mixing between the nutrient-rich deep waters and the nutrient-poor surface ocean, particularly in tropical areas with detrimental consequences for ocean productivity, hence significantly diminishing food security from fisheries.

Ocean warming is also likely to have direct effects on the physiology of marine organisms and thereby alter the geographical distribution of species, including those of commercial importance, currently well-adapted to existing conditions; for example, temperature increase is almost certainly contributing to the decline of cod in the North Atlantic.

The heat content of the ocean is immense with ~90 per cent of the energy from warming of the Earth system stored in the ocean over recent decades. There has already been a mean sea surface warming of about 0.7°C over the last 100 years, likely to increase by over 3°C in some ocean regions by the end of this century.

Ocean deoxygenation is the reduction of dissolved oxygen (O2) in seawater. Climate change can influence oxygen levels in the ocean in several ways. This is certain to occur in a warmer ocean since higher temperatures reduce oxygen solubility. Warming is also likely to create a more stratified ocean, decreasing the downward oxygen supply from the surface. Ocean acidification and nutrient run-off from streams and rivers can also contribute to deoxygenation.

Fish and many other marine organisms depend on sufficient levels of oxygen to function, and may therefore be stressed by declining oxygen concentrations. Extended zones of low oxygen may result in the exclusion of such organisms. However, other organisms tolerant of low oxygen, particularly microbes are likely to flourish, altering the balance of communities. Low oxygen levels in the ocean may also increase the amount of greenhouse gases in the atmosphere by changing feedback mechanisms involving methane and nitrous oxide.

Current ocean models project declines of 1 to 7 per cent in the global ocean oxygen inventory over the next century. However, there are considerable uncertainties regarding the scale and location of oxygen changes, and their ecological impacts.

In the future many parts of the ocean are likely to experience more than one of these environmental stressors at the same time, since they are driven by the same underlying process – increases in atmospheric CO2 and other greenhouse gases. These “hot spots” will not only be warmer, but are also likely to be more stratified, have increased acidity and contain less oxygen, increasing the stress on marine life in ways that may be more than the simple addition of each.

For example, ocean acidification can make species more susceptible to the impacts of warming waters, and higher CO2 alongside lower oxygen levels can create respiratory difficulties. Acting together these stressors could more rapidly threaten biogeochemical cycles, ecosystems and the goods and services the ocean provides to society, thereby increasing the risk to human food security and industries depending on productive marine ecosystems. Furthermore, changes in the exchange of gases between the atmosphere and ocean will impact on climate change. 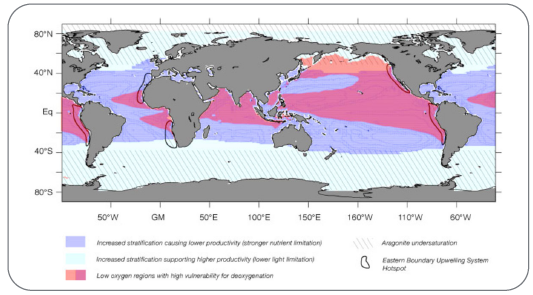 Importantly and worryingly, these “hot spots” of multiple stressors are likely to coincide with areas high in ocean productivity - and currently supporting significant fisheries and subsistence fisheries in developing countries (see maps).

Mitigation: As ocean acidification is mainly caused by CO2, strong mitigation measures are required to reduce its emission. Atmospheric accumulation of other greenhouse gases should also be limited, as all of them contribute to ocean warming and hence deoxygenation.

Adaptation: Adaptation strategies need to be developed as the world is already committed to a substantial amount of additional warming, acidification and deoxygenation, even if atmospheric CO2 could be stabilized at the current level. A key strategy is to ensure maximum potential for resilience in the system, e.g. by maintaining, or even increasing biodiversity and by conserving a diverse set of habitats. The reduction of other environmental stressors, such as coastal eutrophication and pollution by organic and inorganic substances will be helpful as well. However, given the unprecedented rate of change it is doubtful that adaptation measures alone, without mitigation, will be sufficient to avoid most of the harm.

Research: Research is required to improve our knowledge and understanding of these three connected stressors. For example, whilst ocean acidification has recently become a topic of high research priority, deoxygenation has not yet reached that level of recognition.

What is really missing is the joint perspective, where the combined effects of two or all three stressors acting at the same time are investigated. Already, detailed laboratory studies and field experiments from regional to global scale monitoring and modelling are beginning, through cross-disciplinary and international cooperative partnerships. Importantly, research capacity needs to be grown globally, particularly in vulnerable developing countries.

In order to better understand the impacts on ecosystems and the consequences for every one of us, research will increasingly need to follow a multi-disciplinary approach across the physical, life, chemical, Earth, social and economic sciences. These studies need to be policy relevant, with a rapid exchange of knowledge between researchers and decision-makers. 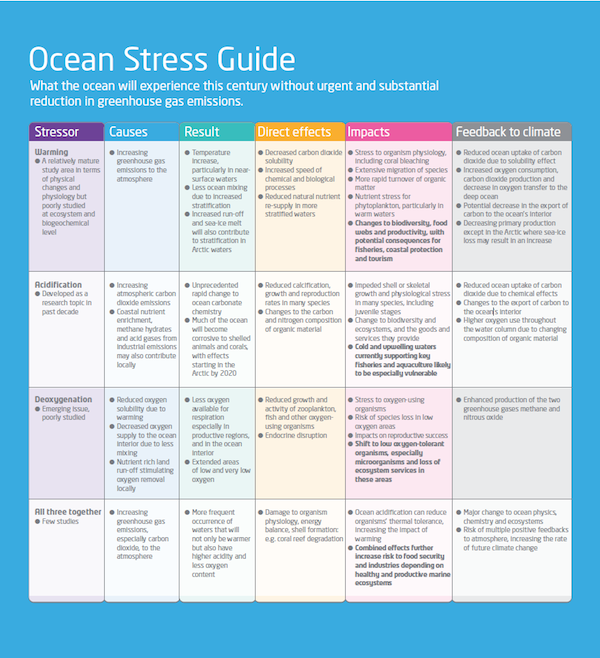