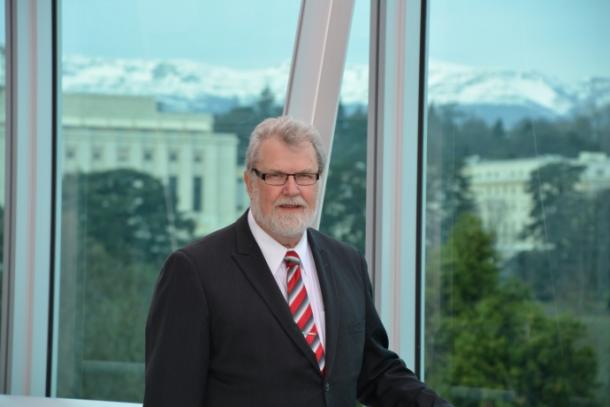 David Grimes, President of the World Meteorological Congress from 2011 to 2019

David Grimes served as Canada's Permanent Representative to the WMO from 2006 to 2019 and was President of the World Meteorological Congress from 2011 to 2019.

When Mr Grimes was first elected President in 2011, one of his goals was to increase the focus on polar regions at WMO, including advocating for better weather monitoring and information services in the North. He never lost sight of that goal. In 2016, at the White House in Washington, DC, he told the Arctic Science Ministers:

In reflecting on the ways forward to address the pressing scientific challenges facing the Arctic and northern communities, one of your first actions should be to reinforce the foundational underpinnings that inform our understanding and actions to be more resilient; in other words, coordinated, comprehensive, and sustained monitoring of the Arctic’s hydrosphere-ocean, atmosphere, cryosphere, biosphere, and landscape changes. Monitoring the changing state of these essential climate variables combined with open data access policies would yield early benefits to mitigate the societal risks and challenges we face in the Arctic and beyond.

Some of Mr Grimes' most notable achievements at WMO include:

In 2020, Mr Grimes was named as a Member of the Order of Canada for his “outstanding leadership in meteorology and for his pioneering development of a global strategy on climate change and disaster-risk preparedness.” The Order of Canada is one of Canada’s top civilian honours. Its iconic snowflake is a fitting tribute to Mr Grimes commitment to the cryosphere and to increasing observations and forecasts in Polar regions as well as the impact of climate change on the Arctic.

WMO has also recognized Mr Grimes with its own top honor – the IMO Prize – for his outstanding contribution to meteorology. He will deliver a scientific lecture at the WMO Executive Council in 2021.

Mr Grimes, a Brock University graduate, was Assistant Deputy Minister and head of Environment and Climate Change Canada's Meteorological Service from 2006-2019. His leadership resulted in its transformation and modernization, including a realization of substantial investments into the Service. Over his 40-year career with the Meteorological Service his accomplishments – in weather forecast operations, the Canadian Climate Centre and science-policy development – were many.  He is recognized for his strategic and innovative thinking, effective problem-solving and engaging leadership style.

Throughout his career, Mr Grimes has been supported by his dedicated, lifelong companion Karen, his three children, Chris, Allison and Kim, and three lovely grandchildren.  Exercising a passion for science and enjoying a loving family coalesce into to a meaningful and fulfilling life experience.