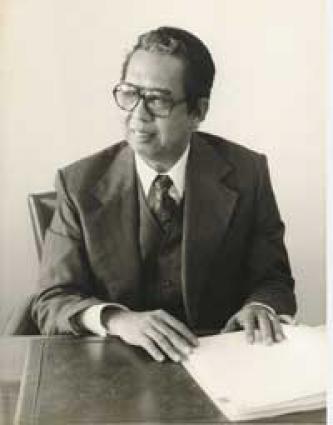 Roman L Kintanar was born in Cebu City, the Philippines, on 13 June 1929 and died on 6 May 2007 in Manila in his 78th year. Fifth in a family of 12 children and the son of a Philippine Congressman who chose resistance over surrender during World War II, his boyhood was shaped by politics, family, war and a love of nature. With top marks at school, he was admitted to the University of the Philippines in 1947. In June 1948, he added a part-time job as an observer with the Weather Bureau, later, under his leadership, to become the Philippine Atmospheric, Geophysical and Astronomical Services Administration. Bachelor’s degree completed, he threw himself into teaching university physics but it was not long before he succumbed to the promise from elder brother Dodong, a 1952 Fullbright Scholar, of a much-longed-for 22-calibre rifle if he too would apply for a scholarship to study abroad. So, by mid-1953, with the support of his own Fullbright Scholarship, he was off for a Master’s degree in physics from the University of Texas, chosen, as much as anything, so that he could “be in the big wide country among cowboys”. Back in Manila, he became engaged to law student Generosa (Genie) Perez in mid-1956, but it was not long before he was off again to the University of Texas and his PhD. As Doctor Kintanar, he returned to Manila in June 1958 and was appointed by President Carlos P. Garcia of the Philippines as the new Director of the Weather Bureau on 1 August 1958. He was just 29.

On 10 January 1959, Roman married Genie at Lourdes Church, Quezon City. They had two sons Maharlika and Tagumpay, born in 1960 and 1961, and a daughter Lualhati (Ningning) born in 1964. It was Ningning who painted the engaging portrait of Dr Kintanar which now hangs in the entrance hall of the WMO Headquarters in Geneva. The wonderful Kintanar family story, the farming and building years, the typhoon traumas, the international career, and the love of art and collections of every kind are told with characteristic Kintanar simplicity and humour in his memoirs published in 1998: Shapers of New Asia. Some fascinating insights into Roman Kintanar’s career are to be found in Hessam Taba’s interview in the October 1994 issue of the Bulletin and the Kintanar retrospective on WMO’s first 50 years in his World Meteorological Day Address of March 2000 in Melbourne.

The story of Roman Kintanar’s international career is a large part of the story of WMO. He served as Permanent Representative of the Philippines with WMO from 1959 to 1995, vice-president of WMO Regional Association V (South-West Pacific) from 1962 to 1966 and President from 1974 to 1978. He then served briefly as Third Vice-President before his unanimous election as President in May 1979. He was a member of the Executive Council for 22 years (1974-1995) and Chairman of the Executive Council Panel of Experts on Education and Training for 16 years (1979-1995), as well as chairman of many other WMO and related international panels and committees, especially those associated with typhoon research and natural disaster reduction.

Roman Kintanar began his career as a weather observer and he maintained a life-long affection for weather observers throughout the world. He enjoyed teaching and took great pride in the establishment of a WMO Regional Meteorological Training Centre at the University of the Philippines. He attended his first WMO Congress in 1963 and, 12 years later, was the obvious choice for the daunting task of chairing one of the two Working Committees of Seventh Congress.

Such was his efficient, insightful, endearing style of chairmanship that no one was surprised when the Congress Nominations Committee submitted his name for election as Second Vice-President of WMO, against Yuri Izrael of the USSR. Such was his humility and personal loyalty that, on learning of his nomination, he was aghast at the thought of running against his good friend Yuri Izrael, the more so since his election would probably have excluded another good friend and mentor, Bill Gibbs of Australia, from a place on the Executive Committee. So, in one of the most gracious speeches at that or any other Congress, Dr Kintanar asked for the floor, expressed his thanks for the honour of nomination, declined to stand and concluded to resounding applause: “I have the highest regard for Dr Yuri Izrael as a scientist, an administrator and a leader, I would much rather vote for him than for myself”. There were few dry eyes in the room and few who did not, at that moment, recognize in Dr Kintanar the personal qualities that were destined to bind WMO together into the tightly knit global family that it was, just a few years later, to become under his presidency.

Dr Kintanar was widely honoured during his career but he always found it hard to accept that the recognition he received really was for him rather than for those who worked with him who he felt were more deserving. But, in retirement, he gained special pleasure from two awards that he received in February 1996, the 40th IMO Prize and a presidential citation from President Fidel V. Ramos of the Philippines.

Dr Kintanar’s years of leadership in WMO were deeply grounded in his belief in the importance of understanding all points of view. He travelled widely for WMO and, wherever he went, he was always listening, watching and learning. All who served with him on the WMO Executive Committee/Council and Bureau, especially his closest friends and admirers, Patrick Obasi (Secretary-General 1984-2003), Zou Jingmeng (his successor as President of WMO), Yuri Izrael, Dick Hallgren, Salvador Alaimo, Bert Berridge, Chris Abayomi, Ho Tong Yuen and many others, often recalled the great moments shared with Roman doing puzzles, performing magic tricks, or quietly solving WMO problems whether on board ship in the South China Sea or talking quietly late at night in some far-flung corner of the world. Some of the great problems of international meteorology—including the for-a-time threatened breakdown of international data exchange—found the elements of their solution in such unlikely places as the back of a mini-bus on the winding road from Quezon City to the Romarosa farm in Tanay, Rizal.

He and Genie were warm, welcoming and gracious hosts to the thousands of foreign meteorologists who visited the farm and the Kintanar family home in Don Antonio Heights, Quezon City. Few who have been there will ever forget Dr Kintanar’s pride in the floodlit statue of Christ overlooking his garden, the specially built family chapel or the delightful meals with the extended family. He was, in every sense, a people person who spent much of his life, quietly behind the scenes, helping others with problems or creating opportunities from which they would benefit. He had a special affection for his Filipino protégés in the WMO Secretariat and everyone with whom he worked in WMO was special to him, each in their own way.

He was a font of great wisdom but he never sought to dominate and, even amongst those who knew him best, he seemed almost shy, sitting quietly in the corner of the room at WMO social functions, his face lighting up in an enormous smile as each old friend came up to talk about deer or pigs or fruit trees or the work of the Typhoon Committee. The entire WMO community were his friends. As President of WMO, he had few critics and no detractors and no one to begrudge him his gradual realization that, in his field, he had gained for his country the admiration of the entire global community. He was, in his modest and gentle way, one of the truly outstanding shapers of new Asia and as fine an internationalist as the world will ever see.

All those whose lives were touched by the warmth and kindness of Roman Kintanar, in the WMO Secretariat and among his fellow “weather workers” around the world, mourn his passing. We all, each in our own way, give thanks for the privilege of having been part of his generation. We extend our sincere sympathy to his beloved Genie and his large extended family. As we, in our turn, fade from the scene, our most precious memories will always include those of a shy, smiling, soft-spoken Filipino scientist who never really quite came to understand that, to the WMO community of his generation, he was the best in the world.

Immediately after graduating in 1970 from the Hydroenergetics Department of the Polytechnical Institute of Bucharest, he worked in the field of hydrology and water management, at first with the Somes Water Directorate, then with the National Institute of Meteorology and Hydrology for 18 years of which between 1987 and 1990 he was Director of the Hydrology Department and, after 1990, with the National Administration “Romanian Waters”. As a result of his research activity we can mention his Ph.D. thesis “Mathematical models for the flood waves forecast under conditions of complex water hydraulic structures” in 1983. He also published more than 170 papers in scientific journals at home and abroad, made numerous presentations at various scientific events and more than 10 books. These included Dynamic Hydrology (1989); Hydrological Synthesis and Regionalization (1994); Deterministic Hydrological Models (1995), Water Management and Hydrology Applications (1999); Intercomparison of Forecast Models for Streamflow Routing in Large Rivers (2003); Water Management—European Principles and Rules (2006). He also coordinated over 15 international projects.

As coordinator of water resources management activities and of international cooperation with neighbouring and Danube countries, he initiated a number of changes, participating directly in the development in Romania of the new concept of river development and restoration. Romania thus became an important actor in Europe and the Danube basin in the field.

In recognition of his work, he became, at an early age, member of various national and international organizations and scientific associations: the Romanian National Committee of the International Hydrology Programme (IHP) (UNESCO); the Inter-governmental Council of the IHP; the Romanian Hydrologists’ Association; the Academy of Agricultural and Forestry Sciences; the Hydrology Commission of the International Association of Hydrological Sciences; and the New York Science Academy. He was also an expert in the WMO Commission for Hydrology and rapporteur for the WMO RA VI Working Group on Hydrology. Within the Coordination Council of the European Centre for River Restoration, he was a member of the River Basin Management Expert Group of the International Commission for the Protection of the Danube River. Latterly, he was head of the working groups of bilateral cooperation on themes of water management with Bulgaria, Hungary and Serbia.

Among his contributions to WMO activities we may mention the technical report for the 11th session of RA VI (Europe) (1986); Hydrological models for water resources system design and operation (Operational Hydrology Report No. 34); Simulated real-time intercomparison of hydrological models (Operational Hydrology Report No. 38); and elaboration of the 39th chapter of the Guide to hydrological practices, (WMO No. 168, fifth edition, 1994).

His scientific achievements were recongized by the Romanian Science Academy with the Gheorghe Munteanu Murgoci Prize (1991) and the Stefan Hepites Prize (1996). He was included in the book Five Hundred Founders of the 21st Century (International Biographical Centre, Cambridge, England, 2005).

Moreover, he was, at the same time, an associated professor at the Technical University of Civil Engineering in Bucharest, where he taught the postgraduate course of Water Resources Engineering within the TEMPUS programme, and at the Environment Section, Geography Faculty, University of Bucharest.

What we can say in these sad moments is that the entire hydrology and water management Romanian community will try to continue what Petru Serban started and could not end. He will remain a living presence among those who were close to him.